The rap triumvirate of Eminem, Dr. Dre and 50 Cent will soar 78-1 on The Billboard Hot 100 to be posted tomorrow morning (Feb. 12) with "Crack a Bottle,” which sets a Nielsen SoundScan record for opening week download sales (418,000).

The trio, each with highly anticipated albums on the way, previously collaborated on "Encore," which peaked at No. 25 on the Hot 100 in January 2005. 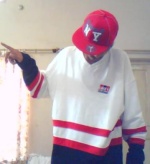