Sha Money XL, G-Unit's Ex (but long time) Vice President, says that Eminem's much anticipated and long-awaited new album will be called "The Empack." With a picture showing Eminem, Dr Dre and 50 Cent above, Sha Money posted a blog on his website warning rappers to release their albums implying that they won't be able to compete with Dre's "Detox," 50 Cent's "Self Destruct" (actually called "Before I Self Destruct") and Eminem's "The Empack."

The first of the three albums is expected to be 50 Cent's on December 9th with Dr Dre and Eminem following close behind. Although it makes more sense to be called "The Empact" (maybe Sha just mis-typed), no matter what it's actually titled, the album will be the first solo release from Eminem since 2004's Encore.

In other news Obie Trice recently talked about a track from Em's new album that features himself and DMX, Read more about the track and Obie Trice Here!

We were discussing on another forum whether which of the album title is better viz. King Mathers or Empact/Empack... what do u guys think???

I think King mathers will be better y'know!
Cause after all he's the king! 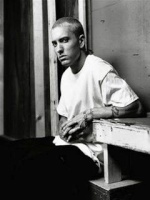 sanjiv wrote:Cashis has already confirmed in his new interview that the album will be titled king mathers

So obviously we can't trust him...